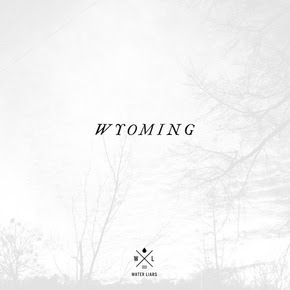 Water Valley, MS folk rock band Water Liars is singer-guitarist Justin Kinkel-Schuster and drummer-vocalist Andrew Bryant. Having had fairly limited exposure to them prior to this, their new album Wyoming came as a bit of a surprise to me. We shared the early release songs "Linens" and "Fake Heat", and I pegged them as closer on the spectrum toward country-tinged quiet folk-rock. Here's "Fake Heat", a sad ballad full of wasted, somewhat depressing images of something like a love affair gone bad, or perhaps never really started:

Here's the thing, though: when you put the record on, the first song, "Sucker", features some blazing guitar - not only that, it's got some feedback. Really, this record veers along the spectrum from acoustic country, dominated by close vocal harmonies, with electric guitars sprinkled in, to some rock sounds featuring some very strong guitar with feedback. Given the emotions expressed in many of the songs - sadness and anger - the increased volume and cacophony embodied by the raging guitar ought not be a surprise.

These two can really write a sad song, and they can really play some country rock. If I just came across this record, I would never guess it was their second full album, and that they had just started making music less than two years ago - apparently they just jammed together and started writing songs in the summer of 2011. Their first album Phantom Limb was released in early 2012, and they've been touring and recording this record since then. If you're looking for the next big thing in Americana or alt/country, they are definitely two guys to keep an eye on. The record is out this week (Mar. 5) on Fat Possum/Big Legal Mess Records.

As I mentioned, they're a hard touring duo... and here are some tour dates: