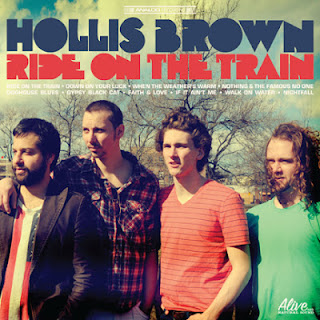 Hollis Brown is a group of native New Yorkers on the venerable blues/rock label Alive/Naturalsound, but their musical influences come from considerably south and east of there. On their debut album, Ride On The Train, they are playing a bracing mixture of something akin to blues-based Southern rock and pure British Invasion-influenced pop. Principal songwriters Mike Montali (vocals) and Jon Bonilla (lead guitar) grew up listening to blues-based classic rock, and claim that the combination of an urban upbringing and throwback musical influences of traditional blues contributed heavily to their sound.

So, the Stones, Springsteen... those are useful touchpoints. Philly soul, Southern rock... useful, too. But go ahead and listen. Here's the video for the title track:

Here's the closing song, "Nightfall" - a great showcase of their sound. It features Montali's soulful vocals, really good piano and acoustic and electric guitar. In a way, I'm reminded of a Lynyrd Skynyrd ballad:

And here's the upbeat, rocking "Down On Your Luck" - tell me if you don't hear a little Latin twinge, reminiscent of some classic East Coast big city guitar rocker like "Rosalita", in some of the solos:

Among the stellar Alive/Naturalsound roster of bands, I'd probably place Hollis Brown somewhere between Lee Bains III and The Buffalo Killers, but lighter on the thrash, heavier on the melody. There really isn't much psychedelic component to their music, the vocals and guitars are prominent, and it is certainly blues-based (most of the tracks feature call/response type structure). While the music is heartfelt and explores many of the traditional pop themes -- unrequited love, jealousy, loneliness -- this is a good-time band for sure. The record is out today.