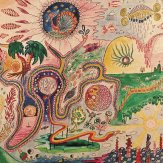 Youth Lagoon is Trevor Powers, a Boise-based one-man band with his second full-length album, Wondrous Bughouse, out Tuesday (Mar. 5) on Fat Possum. Youth Lagoon is playing psychedelic synth- and guitar-based pop music that is both languid and memorable. I reviewed his last album, The Year of Hibernation, and put it on my Best of 2011 list. I've got a real soft spot for this music, maybe because of its resemblance to other favorites of mine like Sparklehorse and Built to Spill, or maybe just because, like those artists, he's executing on a really well-conceived vision in which you can sort of lose yourself. Wondrous Bughouse is a much bigger-sounding record than The Year of Hibernation - the live drumming, in particular, gives a lot of substance to the music.

Here's the second track "Mute" - after an instrumental intro, this song fairly explodes with drums, synthesizers and, eventually, guitars.Then you hear the first lyrics on the album: "Living in a 3D world" - and later in the song, there are interludes that include found sounds you might expect from a science fiction movie soundtrack. It's not like he's showing off - the guy really just has a great imagination and a knack for being able to share it:

Here's "Dropla" - soft, sweet, sad, wistful - like much of Powers' work, it rewards repeated listening as well as listening on different levels. The music is pretty engaging on its own, and has a certain childlike quality. But the content of the song seems to be about the question of comforting oneself on the loss of a loved one - especially how a young person without much experience with such a thing might do so. "You'll never die, you'll never die, you'll never die" he repeats multiple times. The first time, it might be the kind of denial you could expect from a younger person with that particular kind of "immortality complex" that is found in the young. But later in the song, it becomes almost a self-comforting mantra, a recognition that there is a place for the soul to go:

These are two of the better songs on the record, but the quality is uniform. Even if the sound is pretty widely varied, it is wonderful throughout. Some of it is whimsical - "Attic Doctor" and "Raspberry Cane" fairly bring a carnival to life - and some of it is profound, often in the same song, and often in very close proximity. And there are songs that deliver great dream pop, songs like "Attic Doctor" that can stand on their own, but fit perfectly into the sonic landscape of Wondrous Bughouse.

Powers is an impressive talent with a delightful way with a song, and a seemingly limitless imagination. Given the level of success of these first two records and the fact that he's still only 22 years old, there would seem to be plenty of reason to hope for more music this good, or maybe better. But for now, and for some time to come, this album will keep me plenty busy. You can order or buy it at Fat Possum's website: