"Tae the Poets" by Chris Connelly and Monica Queen 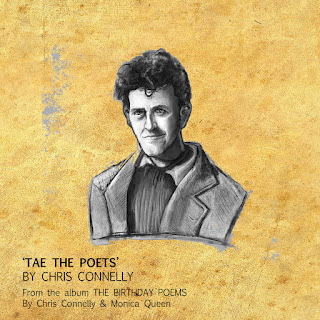 "Tae the Poets" is the first release from a very interesting project titled The Birthday Poems. The project intends an 18-track album presenting a fictionalized romance between Scottish personalities Stella Cartwright and George MacKay Brown, as well as an exploration of their relationship with Stanley Roger Green. The artists are Chris Connelly and Monica Queen, with the former taking George's voice on the album and the latter taking Stella's voice. The title of the album refers to the poems that George would write for each of Stella's birthdays. You can read more at the link below, and we will write more about the album and distinguished artists Connelly and Queen when we feature the album.

"Tae the Poets" is a romping, stomping sing-along featuring Connelly as George MacKay Brown that brings a smile to my lips every time I listen. The accompanying video shouldn't be missed. It was filmed on location at Chicago's GMan Tavern. While I have lived in Chicago in the past, I never have been to that establishment. I now am feeling a sense of loss about that.

The Birthday Poems will be released June 15 via Jnana Records (Ontario, Canada).