Kendra Sells - All In Your Head 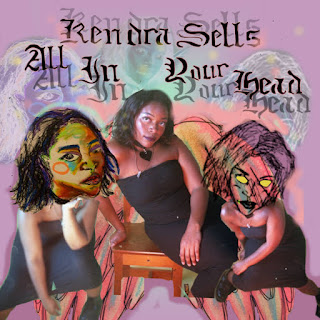 In the course of seven songs, one an interlude and one labeled an outro, Kendra Sells takes the listener on an exhilarating trip, and true to the title, it is all in your head. The one constant throughout the EP is her sinuous, fantastic voice. She is able to contort the vocals to fit all types of music - for example, the psychedelic soul of lead track “Your Cut”, a song that has plenty of musical twists:

Another turn around the bend is "Call Me When Ur Dead", a pleasant instrumental with sort of a samba feel, which plays out as the singer fully executes a breakup. How many ways can you say "don't call me again"? Well, that's the deal here. She's singing it all the way out, because she wants to make sure this person gets the message:
The key track to me on this record is "Wondering / Bad Doctorzz". This is the one where Sells delivers her eclectic musical talent with both barrels, and it is a true wonder. As mentioned, this record is all over the place, in the best way possible. From psychedelic soul to a Brazilian-tinged sweet-sounding breakup ballad to, what we have here, a track featuring a Black Sabbath guitar intro which leads into a slinky vocal in which Sells sounds like she is singing about a bad boyfriend ("It's a trap so don't pay him no mind / Cause he's used to getting his way all the time"), and then the music switches gears into some serious Bad Brains-style punk guitar noise, while Sells segues into singing about a real problem in a personal way:
Bad doctors build a repertoire of writing people off
Say call us when you’re dead if you’re just worried bout a cough
You don’t look like my daughter and you don’t look like my son
If they don’t see a problem then they don’t believe there’s one
Just cause they don’t see a problem doesn’t mean there isn’t one

That probably works better than a study or a page full of statistics at getting you to pay attention to the fact that some people are not treated the same way as some other people by the health care industrial complex, because she sounds like she's singing from experience, with some real anger, and the music is bracing, so you're going to listen.
This is an amazing record. What is most impressive, other than, again, her terrific voice, is the amount of musical ground that is covered in the course of essentially five full songs. I feel like she has more to say, and I’m looking forward to hearing more from Sells. If you don't like your music in preset "genres" and squeezed into categories, you'll be rewarded for giving this one a try.
Kendra Sells - All In Your Head
Posted by John Hyland at 5/15/2021