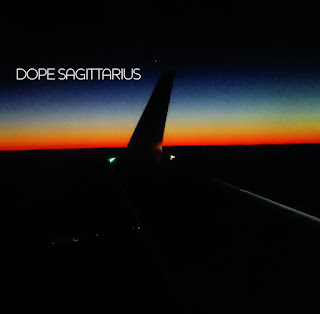 Dope Sagittarius is a group led by Harlem musician Luqman Brown, playing an exhilarating blend of funk, rock and jazz, in a style that is pretty much unrestrained and without borders as to “genre”. The record was to be released in 2016, but due to Brown having a stroke and a lengthy recovery, and of course, 2020, the record encountered delays and obstacles, but is finally ready to see the light. And you are going to want to check it out, because you need this unrestrained, upbeat record in your life.

It’s a riot of sounds: layered synthesizers, drumbeats and vocal choruses behind Brown’s singing and the occasional rap break or guitar solo (somebody has been listening to their Eddie Hazel). It is mostly uptempo, with the funk and rock elements driving at a fast pace, until it slows down a bit for a ballad like “LaRonda” (but even that contains danceable elements). Check out the galloping tempo on lead song, “Alive”:

I take sort of a double meaning on this song - he states that it's about doing what you can against bullying, but hearing him sing "I'm living for today / watch the first step I take", given what he's gone through in the last several years, is to encounter a very high level of joy. Did I say that he's a hell of a singer? Well, he is.

The song "Black Empress" is faster, with staccato drum machine beats driving the tempo and a frenetic violin solo that moves up and back in the mix, with an extended rap about halfway through that delivers this couplet: "and damn if the karma didn’t boomerang / And you wish you had treated them better then you had" - the song is a warning, and the Empress an instrument of vengeance. As Brown says: "When I wrote this song, back in 2016, it was because I was fed up with the killing of unarmed Black people by police that year and throughout American history. Sadly, not much has changed since then. This is my way of saying that, if we can't stop this senseless killing, the world will end in chaos and violence”:

My favorite track is "Sacred Place", mainly because I think it's got his best singing. But the extended dancehall rap does add a bit of variety:

This is a great record, fairly bursting with ideas, eclectic musical approaches and, again, some great soul vocals from Brown. The music is available online, and the vinyl is out this week. Highly recommended.