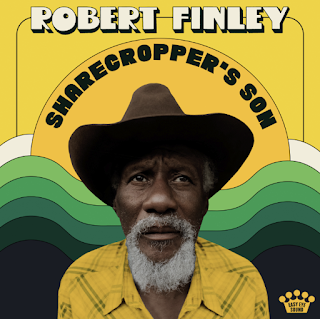 Robert Finley is an actual sharecropper’s son, and he has a hell of a story. Fortunately, for our purposes, he also is a hell of a singer. On Sharecropper’s Son, he displays a sort of vocal dexterity that sounds like the result of a lifetime of listening to and singing everything from gospel to country to R&B and guitar rock. I hear echoes of Al Green in the way Finley is unafraid to launch a high falsetto croon (like at the beginning of opening track “Souled Out on You” and most of “Country Boy”).

But he’s got the sense to know when, and the talent to be able, to drop down into an guttural growl where the material calls for it. And on a lot of the songs here, he simply stands in front and sings like a rock and roll frontman in an R&B-inspired guitar rock band, only coming from Finley, lines like “working from can ‘til can’t” have a particular resonance that you don’t expect to hear from someone singing in 2021. And, again, he is a terrific vocalist and has the charisma and showmanship to lead a rock band.

As hard as it may be to believe, listening to him sing, he only took it up as a profession in his 60’s after military service and a lengthy career as a skilled carpenter, when due to a bout with glaucoma, he became legally blind. Finley has enjoyed the ability to get his stories out in the world: “One of the things I love about music is that, when I was a boy growing up in the South, nobody wanted to hear what I had to say or what I thought about anything. But when I started putting it in songs, people listened."

That one puts me to mind of something like “Lodi” or (not to be too “on the nose”) “Cotton Fields” by Creedence Clearwater Revival, with the kind of imagery that Fogerty used to do such a good job of drawing with his lyrics and fleshing out with his guitar sounds. Speaking of expressive guitar sounds, the producer of the album, and guitarist and co-writer on a lot of the material here, is The Black Keys’ Dan Auerbach. This record was recorded and produced at his Easy Eye studio in Nashville, and you can hear his stinging lead guitar as a counterpoint to Finley’s vocals at key moments throughout the record. It's out right now (released 5/21) on Easy Eye, and available to stream or buy physical copies at the links below.
Robert Finley - Sharecropper's Son at Easy Eye Sound
Robert Finley Instagram
Robert Finley Twitter
Posted by John Hyland at 5/23/2021