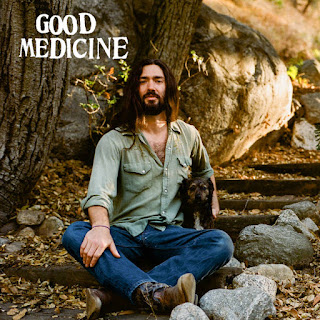 Stevie Weinstein-Foner is a singer-songwriter based in LA, and there’s more than a touch of Laurel Canyon in this open, sweetly swinging folk rock song. “Good Medicine” is an advance track from his second album (first in 7+ years), Wondering, due out in June, and it’s a good taste of what he is up to now:

I love the sentiment behind this, and his motivation behind recording again after so long, so I'm just going to post the lyrics in their entirety:
our souls grow like square watermelon
deprived of space and cut off from light
what we need is some good medicine
to heal our wounds and to give us sight
so many lifetimes have passed us by
but with our angels we will fly
a feather from their wings will take us through the night
a dose of something strong and bright
what we need is some good medicine
all of us here are starving for love
none of us has come far
let go of your arrogance and look around you
it's in our bones and it's in our stars
In the time between albums, Stevie’s been touring and playing with partner Jolie Holland, and several other guests play and sing on the album. That’s Levon Henry on sax on this track. Calling it “Southern California folk-rock”, and that'll do for now, but there's more to the album and we will share it with you as it is revealed. Enjoy the good vibes and send good thoughts Stevie's way.
Stevie Weinstein-Foner website
Posted by John Hyland at 5/02/2021