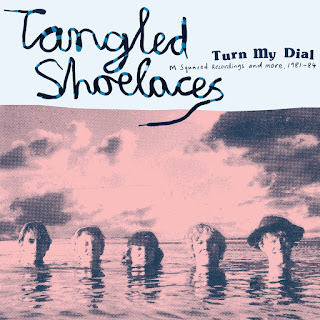 Sometimes when I see a band name I wonder whether there had been a decision to close their eyes and then name the band after the first object in view when eyes are opened again. So, it might be a 'car seat headrest', 'blue ocean', 'mountain' or mean uncle Bob - and I'm 'grateful he is dead' (only shortened to fit on the drum kit). Whatever, some of those names work and some don't. And of course, many or all may have been chosen for other reasons. But if a young Brisbane band in the early '80s chose their name by opening their eyes finding themselves looking at their tangled shoelaces, it would be all too perfect. Perfect, because they were kids aged 10-14 when they started the band. Moreover, the songs on the record featured here -- Turn My Dial - M Squared Recordings and More 1981-84 -- were recorded when they were 11-18 in age. The charming name is one thing -- and a very good thing -- but the quality of the music from musicians so young is truly remarkable.
Their music is relatively uncomplicated, but melodic, resolutely upbeat, sincere, versatile, and playful. Sure, is is naive at times, but that is honest expression for teens too young to enter a pub or get a driver's license. Moreover, the 22 songs on this compilation reveal a band whose members could write ace songs, play multiple instruments, and deliver a good show. That they broke up in 1984 when the oldest members were just 18 seems a shame, but they left a number of tracks which previously were issued by Sydney label M Squared. That album and other selected gems now has been reissued in digital and vinyl formats via Melbourne's Chapter Music. And having lived with this delightful playlist for a few weeks, we are extremely grateful that they did. It helped us all feel young again.

Tangled Shoelaces were sibling Stephen, Lucy and Martin Mackerres, and their neighbor Leigh Nelson on drums. 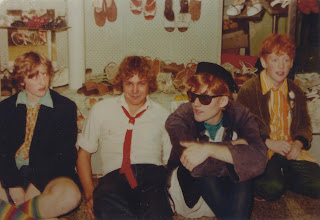