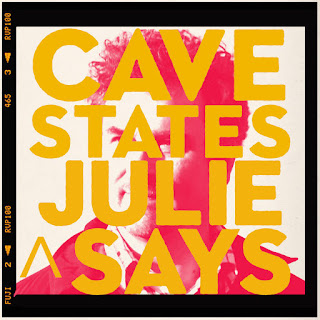 Cave States is a St. Louis-based trio playing literate guitar-based Americana music. On the title track, they take an arresting, kitchen-sink approach to the instrumentation. On "Julie Says", the band starts out with a fully Spectoresque wall of sound - a piano, a drum machine in place of a snare crack that leads into a couple of amplified drum fills that precede each heartfelt vocal chorus. It’s a lengthy track that features a lot of different sonic approaches as it goes on, including a female voice singing wordlessly that takes over the last minute or so of the track. The approach on this song seems calculated to fill it with a lot of emotion. This befits what sounds like a morality play carved out of an argument between two friends that, in retrospect, looms very large to the writer. Here’s the video for “Julie Says”:

Also on this 3-song EP are two softer, acoustic-based tracks with terrific vocals, reminiscent of the Jayhawks to me. Check out "Gone Are the New Days" and "Time for Telling":
The pedal steel on "New Days" is well-placed, providing a wistful backdrop to the nostalgic lyrics. The EP is full of well-done touches like that, including some soaring vocal harmonies on the choruses of each song. These guys are talented, and experienced, veterans of several Missouri-based Americana acts. The group consists of Danny Kathriner, Chris Grabau, and Todd Schnitzer. They all sing, and Kathriner wrote “Julie Says”. The music was produced at Schnitzer's studio, Popscreen. It's available to stream and buy now (5/21) via Bandcamp or the band's website, as well as on your favorite streaming service.
Cave States website
Bandcamp
Posted by John Hyland at 5/24/2021