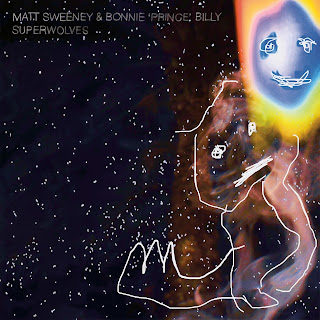 On their second album together, Superwolves, Matt Sweeney and Will Oldham (Bonnie “Prince” Billy) have made what they are describing as a sequel to their first, Superwolf. About 16 years later, and in the middle of a pandemic, the album’s themes of love, terror and nature seem particularly timely. There is terrific chemistry between them, and echoes of each of their past work - Sweeney’s versatility and virtuosity are on display, as are Oldham’s ability to deliver both warmth and terror, sometimes in alternate lines.
The overall impression of this album is of space. I think it would have been easy to stuff this album full of sounds, to drive everything forward and sort of overwhelm the listener. These two artists certainly have the talent to do that, and they clearly have a lot to say. But what’s really admirable is the way they let these songs stretch out and breathe. This allows some of Oldham’s vocals to echo, resound and provoke all kinds of thoughts and feelings. It also allows Sweeney to take his time with some of the guitar leads, delivering a stronger effect than would be the case with a lot of searing rock solos. Don’t get me wrong, this thing frequently rocks. For example, check out the roaring “Hall of Death”, sort of reminiscent of Richard Thompson’s work on Shoot Out the Lights:
That is Tuareg guitarist Mdou Moctar playing with Sweeney on “Hall of Death”. Elsewhere, Sweeney supplies intricate acoustic work, as several of the tunes take a gentler folk turn. Here is “My Blue Suit”, a song about - well, what, exactly? - the humility and freedom inherent in acknowledging your betters?
Maybe it’s just an observation he made one day when his wife tried on his suit, but it sounds like more than that. As do most of these songs. Even when Oldham is singing a sort of lullaby like “Resist the Urge”, there is a lot going on. It’s a tremendously affecting song that depends on some wonderful interplay between Sweeney’s delicate acoustic work and Oldham’s mournful yet hopeful vocal.
This is a terrific record, and will continue to reveal itself for quite some time to come. It’s out now (4/30) on Drag City Records.
Superwolves - Order or Stream
Posted by John Hyland at 5/05/2021