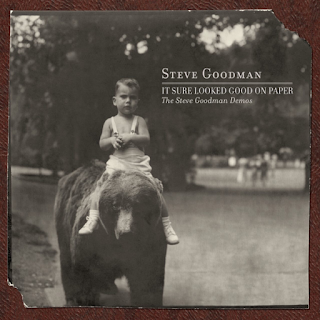 This is a terrific collection of Goodman demos, both solo and with a band. It’s a must-have for any Goodman fan, but more than that, it has the potential to have Goodman’s talent be exposed to a new generation, or to a wider population that may only know him from stories like the one about the perfect country song. You don’t know that one? Look it up, it’s worth the effort and it includes, in addition to Goodman, his friend John Prine and David Allan Coe, who ended up having a huge country hit with “You Never Even Call Me By My Name”. I’m just saying it’s a good thing to have a collection showcasing Goodman putting his songs down on tape the way he thought they ought to sound.

On this collection, there are 16 solo demos with just Goodman and his guitar, but they aren’t raw. They are well-produced and Goodman sounds good on all of them. There are also four band demos, all well-played, including some steel guitar on “Eight Ball Blues” and some electric lead, pedal steel and acoustic interplay on “City of New Orleans”:

This material is all previously unreleased, which makes it an even greater value and a real treat for anybody who’s even slightly a fan of singer/songwriters. Omnivore does these reissues and rediscoveries as well as anybody ever has, collaborating with Goodman’s daughter Rosanna, who supplied photos as well as consulting on the material. It’ll be out Friday (5/14).
Steve Goodman at Omnivore