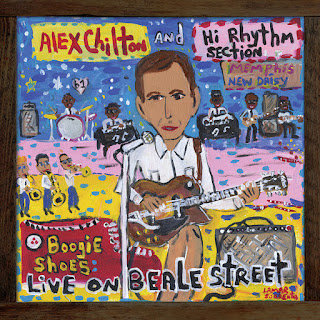 This record is a joy, a coming-together of several true Memphis icons in 1999. At that time, musician and producer Fred Ford, co-founder of the Beale Street Music Festival, was diagnosed with cancer. Renowned Memphis music writer and entrepreneur David Less organized Fredstock, a fundraiser to help with Ford's medical bills and among others, he asked Alex Chilton, a Memphis legend in his own right (Big Star, Box Tops) to participate. Alex had been recording in New Orleans and apparently said he didn’t know who he would play with in Memphis. Less suggested that they had a band he might be able to sing with — the Hi Rhythm Section, the band behind the great work of Al Green's heyday, as well as a host of Memphis soul greats. Alex replied, “That will work.”

This is a terrific document of a night that had to be just a knockout, with Alex Chilton, who always "should've been" a 70's radio star fronting a band that played on one Top 40 hit after another, both of them sounding like they're having a ball. Apparently they did not have time to rehearse, but of course they all knew the songs, and Chilton just calls out the titles and the band takes off. Most of it is pretty straight ahead, but there is definitely some soloing on the horns and guitars on a few of these songs. Here’s a trailer with some information and snippets of the music:

Here's the track list:
1. Boogie Shoes
2. Precious, Precious
3. 634-5789
4. Kansas City
5. Lucille
6. Big Boss Man
7. Where Did Our Love Go
8. Maybelline
9. Hello Josephine
10. Trying to Live My Life Without You
At the end of his set, Alex offers the last song and promises that Rufus and Carla Thomas will be on stage soon enough with "some real stuff". But of course, he and the Hi Rhythm Section had just run through about an hour's worth of real stuff together.
This record will be available this Friday (5/7/21) in CD and vinyl editions from Omnivore, who we also have to thank for the Big Star retrospective soundtrack linked above.
Boogie Shoes at Omnivore Recordings
Posted by John Hyland at 5/02/2021