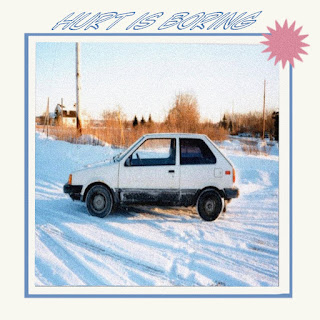 My opening sentence was going to be that the five songs on Hurt Is Boring should be sufficient to make any listener a fanclubwallet fan. But in reality the title track, the previously released single "Car Crash In G Major" probably will do it. If you still are on the fence, the following "C'mon Be Cool" is more than sufficient to put you over. Moreover, there is no drop in quality in the remaining tracks. The melodies are consistently addictive, and the artist's performance rocks out with just the right balance of attitude and nuance.

fanclubwallet is the project of Canadian Hannah Judge, who productively used time dealing with an illness to create this debut EP. Love, heartache and, of course, boredom are the topics du jour, and her treatment of them is deft and engaging. By the way, the project was named for a Dennis the Menace wallet that belonged to her father.

Hurt Is Boring is out now in digital and cassette formats.