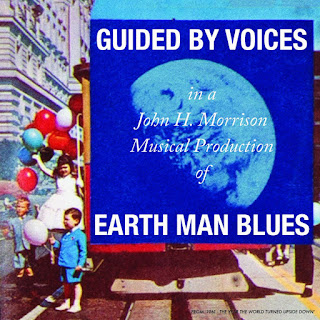 Guided by Voices’ latest album, Earth Man Blues, is variously described (by Robert Pollard, now the band’s sole songwriter) as a collection of rejected songs, but also a song cycle, the story of Harold Admore Harold. I’m not sure about the story cycle, but there are some of the trademark Pollard creations -- pastiche songs that change identity two, three or four times in a minute or two and make it clear that Pollard never runs out of ideas, never censors them, never throws them away and can always find a way to create a sort of miniature song cycle right in the middle of an album.

The first track, “Made Man”, is a great start, with an insistent sort of punk guitar line leading into a quick change into a short section with strings, then a fadeout with a shouted chorus over a quick, insistent guitar riff:

“I’m a fast ride”, he says. That thing changed three times in 1:21, and nobody does that like Pollard. Others in that vein include "Dirty Kid School", "Ant Repellant", "Sunshine Girl Hello" and the prog rock centerpiece here, nearly 6 minutes of Who-meets-Wire-meets-Pollard uniqueness, "Lights Out in Memphis (Egypt)", which even though it explicitly mentions Egypt, seems to make oblique reference to a great Memphis, Tennessee indie rock band that Guided by Voices has some history with. Coincidence? I doubt there are any coincidences, just words like "grifters" that are fun to say, represent some band history and are, well, newly societally relevant:

That's the way to pay tribute to some colleagues in a song. Maybe the Grifters are “trained alien sales reps for Aluminum Can Siberia in your home”, which is one of the fictional commercials in the fictional television network that frames this song.

As usual, there are some stunning pop songs here, full 2:00 to 3:00-plus guitar-led numbers, like “The Disconnected Citizen”:

Is that one about our polarized society, or is it simply about Harold's parents having trouble agreeing on anything? Probably, yes. It does have some of his best singing on this album. Other full-bodied "creamy" tracks include "Free Agents", "I Bet Hippy" and the GbV anthem of this album, "Trust Them Now", which is about as good a motto as I could come up with for Pollard and his band by this time. Just trust them.

What I'm saying is that this is another great Guided by Voices album. I expected no less -- from the beginning, Guided by Voices songs have been assembled in a way that seems uniquely suited to the socially distanced process employed here. (read more at grammy.com about the process) It's out now, and between this one and the imminent Cub Scout Bowling Pins, we will soon have a couple dozen new songs for them to add to the live show. Can't wait.