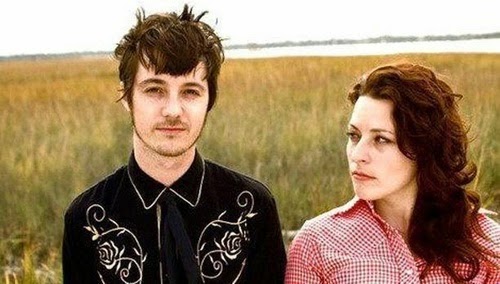 I saw the Drive-By Truckers in Portland Thursday night, and they were spectacular, the songs from their great new album English Oceans (WYMA review here) coming across very strong live.

One of the many joys of the evening was the opening band Shovels and Rope, a husband and wife duo from South Carolina. Okay, let's come clean here - my buddy Patrick Meigs, public school educator extraordinaire, whose music taste I trust, urged me to write about this band maybe a year ago now. Their debut record, O' Be Joyful,  came out in 2012, ages ago in the blog world. So please forgive us for being embarrassingly late to the party, utterly without excuse. But hey, as a boss of mine liked to say, you can only start where you are. And where we are is declaring Shovels and Rope one of our most striking music discoveries in quite some time.

They are so distinctive, a two piece somehow achieving a wall of sound. They meld folk, gospel, classic country, Southern rock and the blues. They are rough and raw, rocking, and yet make beautiful sounding music. Cary Ann Hearst is a compelling lead vocalist, but Michael Trent joins her on every song, and the duet has striking and remarkably strong harmonies. The songwriting is sublime both musically and lyrically. And they are so very Southern, following in the tradition of great Southern rock duos the Flat Duo Jets and Chickasaw Mudd Puppies.

Live they were more raucous than these videos suggest.  Check out "Gasoline", first of 5 tracks you can stream here, including 2 different versions of "Gasoline" (and don't miss song 2 here you Nick Lowe/Elvis Costello fans):

Buy the record, see them live, don't laugh at us for being late.