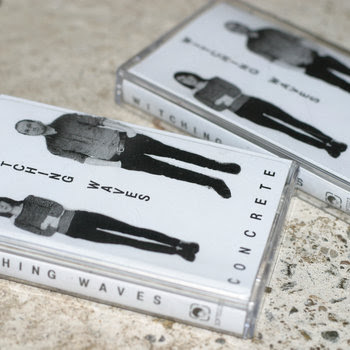 London duo Emma Wigham and Mark Jasper are Witching Waves, a garage band that has an unbridled, exciting sound.  The duo take turns on the guitar and drum kit, and they both sing.  The Concrete single featured here is a two-track cassette to be released in a super limited run of 100 tapes by our friends at Soft Power Records.  The title track is a straight ahead lo-fi garage rocker with jangling, scratching guitar, a steady beat and male/female vocals.  It isn't happy, but it is very captivating.  The second track, "Chain of Command", begins sweet and then explodes with pounding drums and snarling guitar.

Yes, just two tracks and fewer than eight minutes.  But it is enough to conclude that this is a band to watch.  And I think that another release for Soft Power is planned for later this year, so you won't have to yearn long.   But back to the present -- with only 100 copies available, you may want to jump on this one at the pre-order stage rather than wait for the April 21 release.