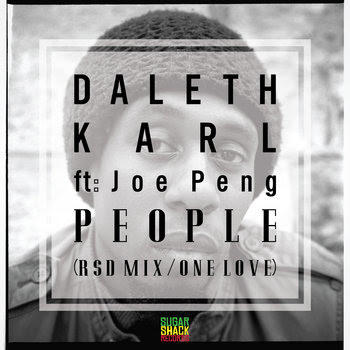 Daleth Karl is a talented "new school" roots reggae artist.  He has resided and performed in the UK and France, both solo and with the now defunct group Idrenites.  His first release for Bristol's Sugar Shack Records is the People 7".  The CD version is a two-track recording, and is a limited run of 100 numbered copies.  The tracks are "People", featuring Joe Peng, and "People Dub (RSD Mix)".  A purchase of the CD comes with a download of those tracks and three other mixes.  You can stream the title track and one of the mixes below.  If you like them I encourage you to hit the Bandcamp link and stream all of the tracks.  I was impressed with each of the dubs/remixes.  The base tune is uplifting, and each mix adds its own individualistic twist.

The People 7" was released yesterday by Sugar Shack Records, which in conjunction with its sister labels in Bristol remains one of the finest sources of reggae on the planet.