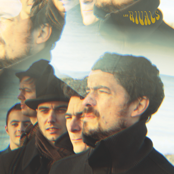 Les Rivals are a French garage rock outfit playing in a style that incorporates a 60's proto-punk approach with an intriguing 70's British punk influence. Like some of the other acts we've seen from Casbah Records (Mesa Cosa, Future Primitives, Owen Temple Quartet), they are proud of their raw, unfiltered attack, and rightly so. But there's more to the record - the 11 tracks here feature some variety, leavening the minimalist approach with touches like the reverb-laden twelve-string guitar on “Halfway There”, the sitar on “Take Me For A Ride”, and even oboe and harpsichord on “The Park”. "Falling From The Shelter" just swings, with keyboards and guitar jangle right up front.

Here is "Glory Days" - shades of Ian Dury and other classic 70's/80's British punk, delivered by what sounds for all the world like a Guy Ritchie character:

And here is "Police Station" - expansive, psychedelic and snotty, a great mix of punk and 60's garage rock:

This is out now, released in March on Casbah Records. We've learned to pay attention when we get something from these folks, and you should too.