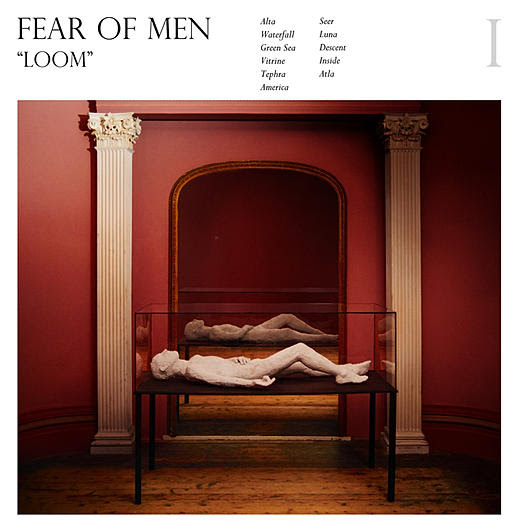 While there is much complaining about modern pop music, and to be fair, much to complain about, at some point we need to face the untidy fact that in order to have music we want, we have to provide full support to that music when it is available.  And by support I don't just mean telling a friend and streaming an album on Pitchfork Advance.  Buy the album; attend the shows; buy a copy of the album for a friend who will like it.  And yes, this little lecture has an ulterior motive.  I've been advocating Fear of Men since I first heard some demos a few years ago.  They now have a debut album, Loom, and I very much would like it to be the first of many.  A number of artists are purposeful in their art, thinking through the message to be conveyed.  A smaller number of artists are top class songwriters, packaging the message efficiently, appealingly, and with emotional resonance.  What makes Fear of Men so special to me is that they score high in both of those categories, and then deliver it with glistening, thoroughly enthralling melodies and sweet vocals that would capture ears even without the other qualities.

Jess Weiss' lyrics directly address weighty themes without sentiment or romance.  A former art student, as is co-founder and guitarist Daniel Falvey, art and literature inform her view of the world and the music she writes.  Water, risk and sleep/dreaming also feature prominently, and the world view, although not quite despairing, is decidedly melancholy.  Because Weiss favors first-person storytelling, the album has an unusual intimacy.  The overall thematic effect is literate without being pretentious, and anxious without being neurotic.

Musically, the arrangements feature bright melodies and energetic playing; a listener might find similarities with the Smiths, Lush, or Veronica Falls.  Ultimately, the band relies on Weiss' voice to sell the song, and it is trust that is well placed.  Her soaring, affecting vocals and Falvey's shimmering guitar are treasures.  In addition to Weiss and Falvey, Fear of Men include drummer Michael Miles and bassist Becky Wilkie.