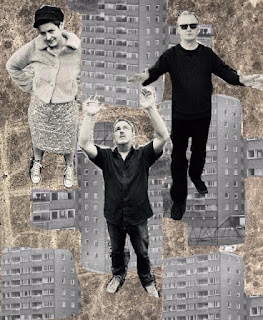 We wanted to start our music week with something we think is very special, so here are the first two singles by Swansea Sound. "I Sold My Soul On EBAY" is fresh and new, and the two track "Corporate Indie Band"/"Angry Girl" was release last October. This is indie music at its finest: Exuberant with a dose of acerbic and self-referential humor and a good dose of punk. The quality is no surprise, as Swansea Sound brings together Hue Williams and Amelia Fletcher who were members of the Pooh Sticks with Rob Pursey and Ian Button. Hue and Amelia handle the vocals, Rob plays the guitar and Ian drums. Rob and Amelia also perform as Catenary Wires and formerly were members of Talulah Gosh, Heavenly, and Tender Trap.

The singles are available as digital releases. A single copy of "I Sold My Soul On EBAY" also was pressed in vinyl and auctioned off. The auction is over. You didn't win. But get the singles now, and you still will be considered a winner!

By the way, "I Sold My Soul On EBAY" is release via new label Skep Wax, which soon will release a third Swansea Sound single "Indies Of The World" in partnership with HHBTM, Formosa Punk, and Lavender Sweep.

Bandcamp for "I Sold My Soul On EBAy"