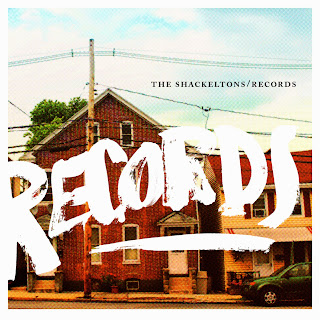 Already a passionate band with a furious, straight-ahead postpunk style, The Shackeltons seem to have drawn power (and, to my ears, grace - no, majesty) from singer/songwriter Mark Redding's personal journey of late. As the band was growing in stature between 2006 and 2010, he learned that his mother was ill and eventually, he took time away in order to be with her. As is the case so often, a decision made for the right reason, is often proven right for many other reasons. Redding's mother appears on the record in a couple of recordings which strike a just-right tone surrounding the angular guitar noise, squalling sax and pounding rhythms. But it's the passion evident in this music that shows how Redding came back to rock and roll with a renewed spirit and, in that, he honors his mother greatly.

Of course, if the music wasn't so thrilling, this would just be a nice story and, while Redding would always be admirable for risking his music career to attend to his mother, we would probably not know about Records. This album is a tremendous accomplishment - heavy, ferocious, and somehow at the same time heartfelt and emotionally full.

Here's "Call Call" - raging guitars compete with a resonant saxophone over the latter half of the track:

Here's "California", probably the heaviest track on the record:

Here's a video for "The Ache". There's a band I was reminded of during this one, and it's not a comparison I make often - The Minutemen:

I've also seen Pixies comparisons, and perhaps that's apt - you can hear it somewhat in the bass rumble, frantic-sounding vocals and overall heaviness of a lot of the material. But The Shackeltons are their own band, having matured a ton between their debut and this long-awaited followup. Records is available now (out Apr. 22) on Think Loud.