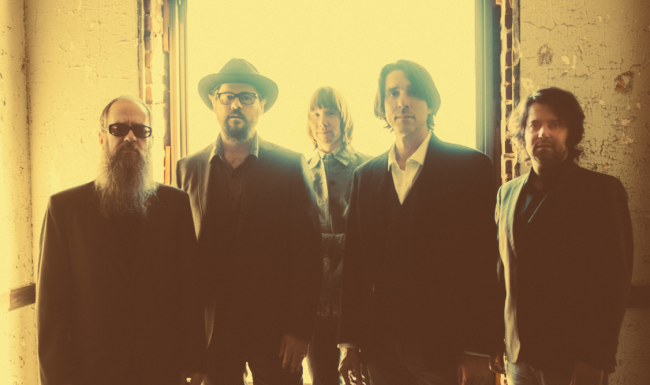 The release of a new CD by the great Drive-By Truckers would be a cause for celebration here at WYMA under any circumstance. But the fact that English Oceans, the band's 12th CD, is one of their very best makes us extremely happy.

The band took some time off in 2012-13 and had more time to write. It shows as the compositions are strong. And the current lineup of the band is both muscular and versatile.  English Oceans captures the feel, spirit and variety of the Truckers' legendary live shows.  There is a confidence and high level of competence to this record reflecting just how seasoned and unified the Truckers are.

In particular. English Oceans represents a high water mark in Mike Cooley's songwriting. His 6 songs here are to my ears the best overall batch he's done. And they fit very well with Patterson Hood's songs, the two longtime musical partners seemingly influencing each other a bit and growing together as songwriters. Rather than a dramatic yin-yang, there's somewhat of a cohesive whole here from start to finish.

Producer David Barbe knows the band well and captures a great sound - organic but tough, keeping it simple but adding a little extra flavor like horns at just the right time. Overall, English Oceans is the sound of a true band, and a rock band at that, a collective, the whole even greater than the sum of its parts.

We love this record so much, John and I will give you a song-by-song tour:

"Shit Shots Count":
JD: The record launches with a kick ass Stonesy rocker from Cooley that may be my favorite of his since "3 Dimes Down". The song is the perfect introduction to English Oceans - sit up and pay attention folks, we mean business here! The song has a a killer horn piece at the the end that is straight out of their Muscle Shoals rock and soul roots. I love Cooley's knack for the great line like: "Boss ain't as smart as he'd like to be, but he ain't nearly as dumb as you think." Man this sounds great turned up real loud on the car stereo.

JH: This song is reminiscent of some previous rock songs as slices of working class life: Wilco's "Monday" and Elton John's "Saturday Night's Alright For Fighting", the former for that great horn section JD mentioned, the latter for an overall feel, something about the guitar parts and the spirit of "I'm not afraid of you -- you can't do anything to me that hasn't already been done."

"When He's Gone":
JH: Lots of sadness on this album... or perhaps ennui? This is probably the most devastating track, in its depiction of what sounds like a completely empty relationship. Hood's expressive vocal really carries the mood of the song.

JD: The toughness of the sound contrasting the tender story is one of the things Hood and this band do best. Hood's singing is great throughout this record, but nowhere more than here.

"Primer Coat":
JD: A mid-tempo gem from Cooley that would been right at home on a mid-period R.E.M. record. Almost sounds like Peter Buck is playing on it. Great example of the story-driven lyrics and a bit down-on-their-luck characters that these guys are so good at. Very economical and illuminating writing: "He used to swim back in school. Graduated in '84, quit drinking in 92."

JH: Almost? Here's a video of Buck playing on it!

And what I said earlier about a lot of sadness? Reflecting on the sentiments of "When He's Gone", hearing Cooley sing "Someone comes for their babies/ Something dies right then" is even more melancholy as it describes a father's predicament...

JH: This one sounds a LOT like the earlier Hood composition, "When He's Gone". And, from another point of view, it's an even more unstintingly negative take on popular notions of love and devotion (i.e., they don't exist). Hood's vocals are plaintive here, in counterpoint to the tough-as-nails stance of the narrator: "Don’t call me your baby, I’m nobody’s baby/ I won’t let you cage me or lock me away/ I’m not yours to keep, don’t want you to save me".

JD: For such a bunch of badass Southern boys, the Truckers sure do a great job writing about strong and sympathetic female protagonists.  Add Pauline Hawkins to the list, a character lifted by Hood from Willy Vlautin's new novel The Free. The song structure takes a terrific turn with the big piano bridge 2/3 of the way through that leads to the stark piano work of Jay Gonzalez, followed by the all out jam at the end, guitars blazing, rhythm section firing. Hood is at the top of his game here.

"Made Up English Oceans":
JD: A nice change of pace on the sort of title track - a southwest desert sound. Cooley stretches himself a bit here as a writer to great effect. Acoustic guitars and maracas accented by guitar echo. The song is said to be about '80's political operative Lee Atwater.

JH: Yes, I got the southwest twang, too, and Cooley's almost auctioneer-pace on the vocals is an intriguing touch. Kind of a vocal gunslinger?

"The Part of Him":
JH: Some hilarious lyrics in this Hood track about a late, not-much-lamented crooked Southern machine politican:

He was a piece of work, pretty much a total jerk

his own mama called him an SOB

The repetition of his less-savory qualities with good vocal humor has its effect (think "Brutus, he was an honorable man" repeated over and over), and the message is one you'll recall from a much older rock song, "Meet the new boss, same as the old boss".

JD: it ain't easy being an informed, passionate political progressive in the red state South, and Hood lets it fly here, quoted recently that the song is about "political assholery". Yet it's a catchy tune. With a bigger more obvious chorus it could be a sing-a-long. C'mon everybody let's hear it  - "His own Mama called him an SOB!" Okay, it might not have supplanted "Yellow Submarine" in the collective consciousness, but it's a great sounding, cathartic song.

"Hearing Jimmy Loud":
JD: Matt Patton from the Dexateens has been a great addition to the band. Patton's bass line that starts and dominates "Hearing Jimmy Loud" is so kick ass. Another Stonesy balls out rocker from Cooley.  Love the greasy lead guitar throughout. "She’s like a talking leather couch /  Warm between the cushions where she hid whatever treasure fell out."

JH: Is this the story of a young guy who hitched a ride, spent the duration of the trip listening to Jimmy complain about his ex-wife, and wisely chalked it up to experience? Or maybe a fellow driver - he talks about Jimmy's "band" (CB radio band?) and you can almost see the narrator being mesmerized by the sound of this sad character ranting about his wife's tanning habit and spoiled kids. Either way, Cooley's fairly sanguine about it: "That earful cost me nothing/ poor old Jimmy’s paying for it by the pound."

"Til He's Dead or Rises":
JH: It's a Hood tune sung by Cooley, and it absolutely works.

JD: I've expressed my admiration for Cooley's songs throughout here. But I must admit, the first time I heard this, I thought, damn, Cooley is writing with more gravitas these days, good for him. Turns out Hood wrote this one but had trouble with the vocal, so Cooley took the mic and nailed it. Maybe if Jagger and Richards respected each other this much and still functioned together at this high a level they too could commander a record as good as English Oceans. This performance has a great full band feel - piano, drums, bass, guitars all working exceptionally well together.

"Hanging On":
JD: A gorgeous and tender Patterson Hood folk ballad. Very simple, Hood on acoustic guitar with a little bit of keyboard and guitar accents. Hood has become a far more nuanced singer over the years and pulls this off so well.

JH: Sweet, sad and tuneful, this song about a kid who leaves home to "hump it town to town/and never let them down", but still fights crippling self-doubt until finally writing a song "that suddenly the whole world wants to sing"... which brings its own set of struggles. A very pretty song that wouldn't be out of place on Hood's last, very autobiographical solo record.

"Natural Light":
JH: This is a great country song with a bunch of ragged, lo-fi rock guitar that's so wrong it's right. The piano, Cooley's drawn-out vocalization, it's as country as they get.

JD: This one sounds like it's the end of a great night, long beyond last call, light of the next day coming up. Jay Gonzalez is playing the piano, Cooley is crooning a suitably ragged country ballad. Better empty the ashtrays and try to get some sleep.

"When Walter Went Crazy":
JD: For such a seemingly well centered guy, Hood sure has a knack for writing about some devastatingly troubled characters. Walter snapped, poured gasoline throughout the house. "He had rattlesnake in his eyes, blended whiskey in his veins and murder in his heart." Yet, Hood writes about Walter with sympathy. The music in the song is sparse, moving and just right. This one has grown on me more than any song here - dark, haunting, sad, yet beautiful somehow.

JH: Walter's another of the sad, unique characters the Truckers specialize in drawing out... and the ending of the song underlines the cinematic nature of a lot of Hood's writing:

And am I the only one reminded of Dylan's grandpa?

"First Day of Autumn":
JH: Jesus, the saddest/sweetest one yet! First day of autumn brings back memories, but they ain't good: "Memory only shows the promise beauty broke/ of beauty ageless in its time" - not ageless, but ageless in its time (which is about the opposite of ageless, if you think about it. "First day of autumn leaves me numb." And what a simple, sweet, beautiful country rock ballad.

JD: Another southwest deserty kind of feel. Slowed down a bit, understated, pretty.  Cooley's deceptively easy and natural vocals are just right. This is the kind of a great quiet ballad a rock band can make look effortless only after playing together for 20 years.

"Grand Canyon":
JD: An epic close to the record. A haunting and gorgeous tribute to the band's dear friend and crew member Craig Lieske who died of a heart attack in January 2013. Brad Morgan's drums give the song the feel of slow emotional march. Wide open road, an American monument and natural wonder, memory, loss, grief, sadness, highlighting both the fleeting element and permanence of life. So beautiful and sad. A truly stunning piece of writing, a highlight of Hood's esteemed career.

JH: Epic, haunting and gorgeous - all words I remember using to describe how I felt listening to "Moonlight Mile". JD used a Stones comparison to open the review, and I'll use one here... great bands have a way to use changes of pace and sparse instrumentation in counterpoint to the harder-rocking stuff, and it has an even greater emotional punch. What I said about sadness? Well, sure, but this thing is so beautiful, a fitting tribute to a friend, the overriding emotion here is wonder. It's a majestic song closing out their best record yet.