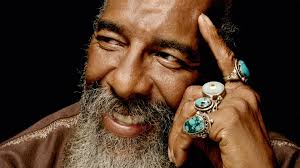 Richie Havens died Monday of a heart attack at the age of 72. He was a man of immense talent and spirit. He was one of the first musicians to truly move me when I first became a serious listener to popular music 40+ years ago in high school.  That voice conveyed so much emotion and real life as did every guitar note. Mr. Havens' simultaneously ferocious and beautiful acoustic guitar playing proved that neither "folk music" nor acoustic guitar left behind anything in terms of ability to stir the soul and send chills down your spine.


Havens first rose to major stardom in 1969 with his 3 hour set that opened the Woodstock concert, elongated because so many artists were stuck in traffic and couldn't get there. Even sharing the stage with the likes of Jimi Hendrix and The Who both in their absolute prime, no one at Woodstock played with more power than the bearded man from Brooklyn (later settling in Greenwich Village) backed by just an acoustic guitar.  He wrote and performed this now classic impromptu near the end of his Woodstock set as he ran out of material to play:


To call him righteous, soulful and a great man would be true but wouldn't begin to sum up this artist. When there was a concert that stood for something important, chances are that Richie Havens was on the bill, as when 100,000 gathered for the Tibetan Freedom Concert of 1996.

Musically, Havens was a master interpreter, able to take a great composition and give it new weight and power under his open tuning guitar style and incredible voice. He had an especially good way with Beatles songs, "Here Comes the Sun" perhaps being his best known Beatles cover, done here live in 1971:

And his recent rendition  of "Tombstone Blues" from the film I'm Not There is one of my favorite Bob Dylan covers:

WYMA favorite Joe Henry produced Haven's "Tombstone Blues" and had this to say today on his Facebook page about the passing of his friend:

I am heartsick to have just learned of the passing of the great richie havens. he was and remains an enormous influence, as he has been for countless others.

his gift was immense, and completely singular. his voice had the reach and authority of an ancient and towering cypress tree, and he offered it with unfailing generosity. his right hand at the guitar had the rhythmic force of a brazilian carnival drum corps, and was both powerful and viscerally intimate.

i had the honor of producing a track on richie for todd haynes' film on bob dylan, "i'm not there." richie blew through bob's "tombstone blues" with such joy and lyrical ferocity that todd felt inclined to create a role for richie in the film, and did.

on that day at sear sound in new york, richie was kind, buoyant, open, excited, and wildly focused; and i was so smitten to be in his company and at his service that i never fully ceased my nagging efforts to lure him back in for a full album.

"i mean, do you know how easy it would be to make a great richie havens record?" i remember blurting out to him, almost as if i was speaking to another of his admirers. he simply threw his head back and laughed; nodded.

it is a dream for me that will now must remain unfulfilled; but my gratitude for his life and work is complete. and i will linger with it.

godspeed, richie havens. you did your work here beautifully, and with love for all.

Joe Henry, being far more articulate than me, leaves me little more to add, except to close with one of my favorite Richie Havens songs, "Follow" recorded in 1967: