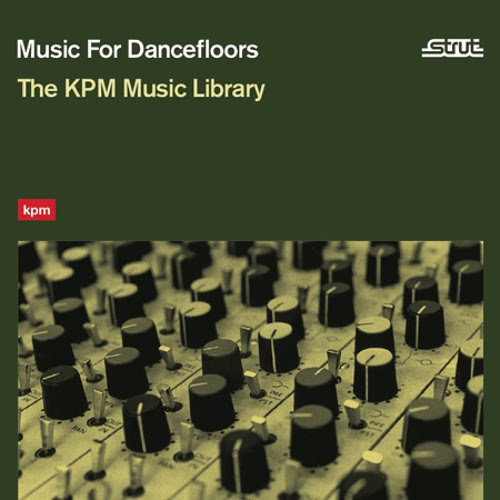 Music For Dancefloors is a collection of tracks from the KPM Music Library, a source of background music that, due to the high quality of the composers and compositions, became sought-after for its own sake. I don't know that you really care to read a review from me, and everything I learned about it came from the Strut Records presser anyway. It's a fascinating concept - music sort of specific to genre on order:

The phenomenon of the music library is unique, involving brilliant but anonymous composers and musicians creating short pieces of music to be made available for background use in film, television, and radio. Originally recorded as a source of go-to material for use in film, television and radio, library music wasn’t intended to be enjoyed in a home listening context, and often wasn’t available for commercial release at all. However, due to the quality of the musicianship and the stripped-down arrangements, music from the best libraries has become extremely sought-after by DJs and producers.

The UK's KPM library (especially its green "1000 series" of the 60s and 70s) is easily one of the most legendary sources of library funk. KPM music has been sampled by the likes of Jay-Z, DOOM, Madlib and Guilty Simpson, Dangermouse, Action Bronson, and even turns up in the opening of Quentin Tarantino’s film Kill Bill (via the Grindhouse promo spot which uses Kieth Mansfield’s “Funky Fanfare”).

This new edition features an exclusive bonus disc, which makes available for the first time the debut gig by the KPM All-Stars, bringing together many of KPM’s greatest composers for a unique night at London’s Jazz Cafe on 27th April 2000.

As a sampler, here's "Swamp Fever" by John Cameron:


This album was released last week (Apr. 2) on Strut Records.