RIP George Jones - Listen, and try to hold it together. Good Luck. 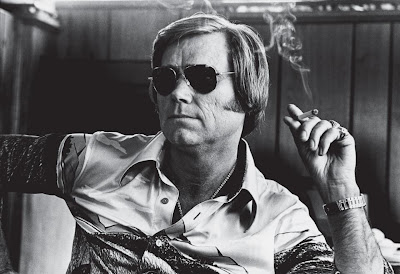 One of my favorite George Jones moments comes from a duets album he released in 1994. In the worst ice storm in the history of Nashville, Tennessee, an amazing cast of music characters assembled in Owen Bradley's studio in Mt. Juliet, outside Nashville, to record new versions of established George Jones songs. The album, entitled The Bradley Barn Sessions, is a true joy, a real treasure. Jones was still in very fine form and obviously happy to show some of these young country and rock artists how a great singer approaches his work.

Liner notes from the session detail how much respect each artist had for Jones, and how he exceeded their admittedly lofty expectations. Keith Richards sang along with George on "Say It's Not You", and was quoted to observe that he was happy as a "pig in shit".

The musical highlight of the album, to me, is Jones' duet with Alan Jackson on "A Good Year For The Roses". When I heard the news today of Jones' passing, I reached for some of his music, and this one was the first I put on. I made it through George's rollicking, good-time duet with the great Marty Stuart - "One Woman Man" - but when it got to "Good Year", well... try it yourself:

If you want to listen to the album, you can get the MP3's at Amazon right now.

But my favorite George Jones song is not that one... luckily, another great collection of classic Jones honky-tonk was released in February on the terrific reissue label Omnivore - The Complete United Artists Solo Singles. It starts off with my favorite Jones song, "She Thinks I Still Care". There are not many lyrics in that song - perhaps the beauty is the simplicity, which gave Jones room to fill it with his impeccable phrasing - I could listen to the way he sings the word "She" over and over, as well as the clever way he rhymes "cheer" and "idea" without actually saying "idear". Sure, he had a voice as sweet as honey, but so do a lot of people. He knew how to sing! Just wonderful:

Other singers could not say enough good things about Jones.

Johnny Cash, asked who was his favorite singer, would respond: "You mean, other than George Jones?"

James Taylor: "He didn't sound like he was influenced by any other singers. He sounds like a steel guitar. It's the way he blends notes, the way he comes up to them and leaves them..."

Elvis Costello claimed him as a principle influence, and recorded a terrific country album with a pretty faithful cover of "A Good Year For The Roses".

And Frank Sinatra called him "the second best white singer in America". Modest, that Chairman...

RIP, George and thank you.

John, this is a terrific piece.