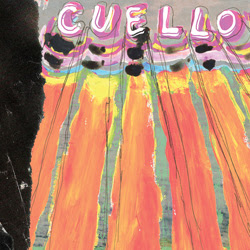 Cuello is yet another project of José Guerrero, who is already one of my heroes for his work with Betunizer (heavy rock, boogie) and Jupiter Lion (krautrock, psychedelia). Like some of my other favorites, he's got so many musical ideas he can't contain them in one entity - but don't be fooled, none of these bands (nor, I would assume, his other acts) are shortchanged in any way.

Cuello may end up being my favorite of the three, and another reason that BCore Disc is a label with which you ought to become familiar, no matter where in the world you reside. Their album is Mi Brazo Que Te Sobre, and it's full of great hard rock containing traces of indie rock heroes like Guided by Voices and The Pixies. But it's definitely its own thing - rocking, rocking and more rocking, but still plenty melodic.

Here's "Trazo Fino" - like taking a trip back to GbV, Propeller-era:

A special shout-out to the drummer Oscar Mezquita (who should never put his shirt back on) and bass player Nick Perry - just mainly because of the relentless, breakneck pace they keep up on songs like "Trazo Fino". Also, in addition to Guerrero's vocals and guitar, check out guitarist Ubaldo Fambuena. All these guys are apparently veterans of the Valencia music scene.

It's hard - really, impossible - to pick a favorite. They sing in Spanish, but think about it, if a band rocks this hard, do you really mind learning enough Spanish to sing along?