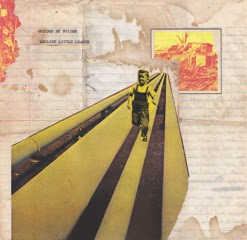 By now, especially if you pay attention to the comings and goings of Robert Pollard and Guided by Voices, you may have already heard 5 of the 17 tracks on English Little League, and you're wondering what kind of sonic delights GbV have given us to accompany them. You won't be disappointed.

The opening track is "Xeno Pariah" - one of the previously released singles that's jangly and short and sweet. It's a classic Pollard guitar pop track with at least two expansive yet economical guitar lines and bass/drum work that's perfectly-played - in and out in 2:03, almost before you can shake your head and wonder, again, how the hell he keeps coming up with these:

And, as on albums like Alien Lanes, it melts into the following track "Know Me As Heavy", which features slurred vocals from both Sprout and Pollard over meandering guitar lines that, about 45 seconds in, build to a hard rock frenzy, including the first appearance of cowbell that I can recall since "Rhine Jive Click"! (did I say "Auditorium"?)

Next comes one of the creamiest, catchiest Sprout tracks ever - one of the singles, "Islands (She Talks In Rainbows)" - it's British Invasion guitar pop with impeccable vocal harmonies:

Followed by a proggy Pollard single, "Trash Can Full of Nails" - but of course, not all proggy, as it features a jangly chorus:

Followed by a guitar/vocal track "Send to Celeste (And The Cosmic Athletes)" - it's played pretty much as a demo for about the first 1:15, then the drums, bass and full guitar sounds kick in as it builds to a crescendo, strips back down to guitar only behind more stream-of-consciousness lyrics, and builds to about a 20-second full-band outro. Like a lot of great GbV songs, it's composed of what sound like three or four separate songs that are woven together seamlessly. And if all you pay attention to are the singles, you'll rob yourself of the fun of discovering a different favorite track on each listen - like the next track, a Sprout psychedelic guitar jam "Quiet Game" that finds him sounding, to me, a bit like Syd Barrett... yes, it will be my favorite at some point. As will the next one, one of the singles, "Noble Insect". It is nearly an epic GbV track - interestingly, it starts out very much like a vintage Tobin Sprout track, until a Pollard vocal kicks in: "Japan/Japan/Japan/Friction in Japan..."

It's got a simple rhythm and the lyrics are pretty spare, with the emphasis being on several rising and falling guitar lines, some swelling keyboards and Pollard's pronunciation of the lyrics... each repetition of line finds him emphasizing a different word or sound. On the album, of course, something this bombastic would want to be followed by an acoustic snippet like "Sir Garlic Breath" - where Pollard, over a couple of strummed guitar lines (one acoustic, one electric) is intoning random lyrics about "five little girls wrapped in pearls" and the apparent hero of the song: "cloven, woven, Sir G". It's all a bit reminiscent of a song like "The Old Grunt", and of course a perfect fit on a GbV record with five singles.

That's eight tracks of the 17 on the album, and I assure you each one will be a favorite upon one of your passes through the album - as will any of the next nine. Hell, who even gives you eight good songs on an album anymore? You know, it's funny. If you're one of those people who doesn't believe in "the album" anymore - you can certainly get more than your money's worth buying the singles. In fact, you might never know what you're missing. But you will be missing some amazing stuff. Get the singles, but get the album. And the next one, and the one after that...

Guided by Voices at Rockathon