Friday Nuggets - "Nobody But Me", The Human Beinz 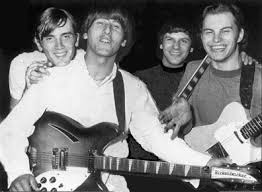 Boasting didn't start with hip hop. The Isley Brothers in 1962 had a minor hit with "Nobody But Me", which was reworked in 1968 by The Human Beinz, a garage band from Youngstown Ohio.

This is a garage rock/blue eyed soul classic. Kids all over the US and UK would count the number of "no"s in the opening after the distinctive drum with guitar reverb intro. It also worked in all the popular dances of the day (shing-a-ling, skate, boogaloo etc.) much like Wilson Pickett's 1966 soul classic "Land of 1000 Dances". The Human Beinz became on of the great one-hit wonders of the 60's.

And if the song alone weren't enough, the icing on cake is this Addams Family TV show video (her name is Carolyn Jones by the way):