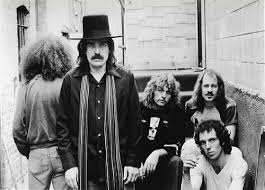 Stand back kids, genius at work here this week.
Captain Beefheart and His Magic Band with a Bo Diddley song that they turend into a garage rock, bluesy stomp classic, "Diddy Wah Diddy" from 1966:


The Captain Beefheart story is a long one, but Don Van Vliet (1941-2010) is certainly a singular figure in rock'n'roll. An innovative musician blessed with a great voice of amazing range, Captain Beefheart as he was known, made a dozen wildly original and influential LPs from 1965-1982 before deciding to lay low. He and Frank Zappa were kindred spirits. Captain Beefheart, didn't sell a lot of records and was far from the mainstream, but was an inspiration to Tom Waits and many others.

As a bonus this week, we'll give you one from Trout Mask Replica, Captain Beefheart and His Magic Band's 1969 avant garde magnum opus. "My smile is stuck, I cannot go back to your Frownland":