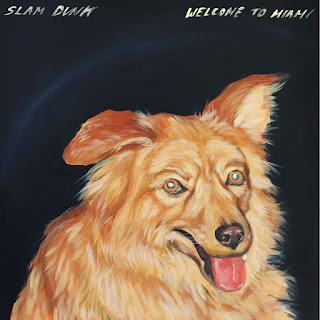 Victoria, BC's Slam Dunk is a punk band. There being more than one type of punk rock, I'll leave it to you to come up with a hyphenated prefix. I saw one that said "soul-punk". Okay, sure. But punk, definitely. They've got a good sound -- great guitars, plenty of ska-flavored horns, shouted vocals and a killer drummer. Give this a chance and you won't regret it. Their second album, Welcome To Miami, came out in November 2012 and I must apologize for overlooking it in the year-end tumult. But better late than never.

They named their band after a basketball move. They named their album after a Will Smith song. And they put a nice painting of a beautiful dog on the cover of the album. Why did they do these things? While you're listening to this great record, you can ponder that. It's almost too much fun, as is the music.

Here's the video for "Dying Breed":

They're playing at the Treefort Music Fest in Boise, ID with over 100 other bands, including Camper Van Beethoven, Sharon Jones & The Dap-Kings, Built To Spill and The Walkmen - and I predict they are going to have a lot of new fans after that. This stuff is pretty much irresistible.

Finally, because why not? - here is a link to a stream-of-consciousness interview with Canadian punk band Slam Dunk about some notable slam dunks.

Excellent - propulsive drumming with some tambourine bangin', sounds like.