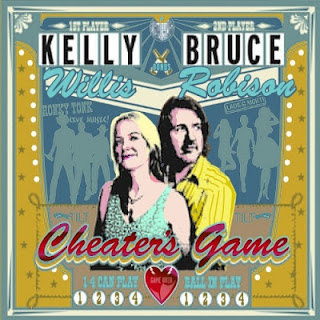 Kelly Willis and Bruce Robison are a couple of super-talented Texans who have each been making some wonderful country music for years, but together, make magic. He is a worthy participant in the grand Texas troubadour tradition with some huge country hits to his credit as a writer, she's a very traditional-sounding country vocalist with a truly great voice. For their latest record, a duet called Cheater's Game, they traveled to Nashville to work with Brad Jones at his Alex The Great studio. Jones' credits include a who's who of singer/songwriters and indie rockers, and this was an inspired pairing.

Cheater's Game is an album of about half covers and half originals and it's the first true duet album they've done, although as Willis points out, "We've always been part of each other's records." As for the reason they've not done this before, it's very understandable. Willis again: "But we're also our own people. We've always been very careful about not losing sight of that."

All that said, they are even better together than they've been individually. On this record, the whole is truly more than the sum of all its parts. You don't listen for certain things, although certain things (Willis' voice, Robison's great way with a chorus/verse transition, great pedal steel all over this thing) do stand out. But it all flows together so well, if you didn't know who wrote which song, you'd never be able to tell by listening.

They cover Dave Alvin, Robert Earl Keen, Don Williams ("We're All The Way" is, maybe, my favorite track on the record), Razzy Bayley and Hayes Carll. And Robison co-wrote songs with Miles Zuniga (Fastball) and Lawrence Shoberg -and, as expected, Robison's songs stand up very well next to the songs they borrowed from these country songwriting giants.

Here's a video of them performing "9,999,999 Tears" - she's a tremendous vocalist, and I especially like the pedal steel in this song:

Here's a nice article from their hometown Austin American-Statesman giving some background on the making of the record. And I agree with the author, this is a great, truly timeless-sounding country record. Cheater's Game is available now (released earlier this week) via Thirty Tigers, and they'll be on tour soon - tour dates at their website here.