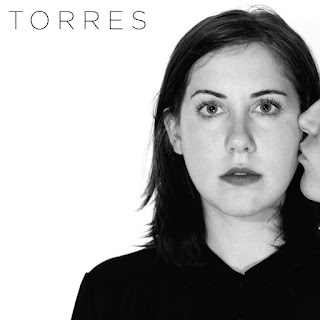 Torres is the name under which Nashville artist MacKenzie Scott records her evocative, country-tinged folk rock.

Scott has a killer voice and a pretty good way with an electric guitar - and after finding a sound that works for her, she's definitely raised her profile recently. In her words: "My family pitched in to get me a Gibson 335 last year for Christmas... I didn't quite find the sound I was looking for until I started playing electric."

I'm reminded a bit of Richard Buckner (the spare instrumentation, jagged electric guitar and wrenching vocal performance, for starters). Like Buckner, the songs vary from spare, guitar/voice only, to songs with strings, to fuller rockers with strong electric guitar leads... and the voice is always the focal point.

The album was recorded at Tony Joe White's house in Nashville. Here's an album promo video:

Here's "Jealousy and I":

And here's a free download of "Mother Earth, Father God" - a good showcase for her voice.

The album was released last week. She'll be playing in Nashville later this week, then taking a short trip to spread the word about the record: