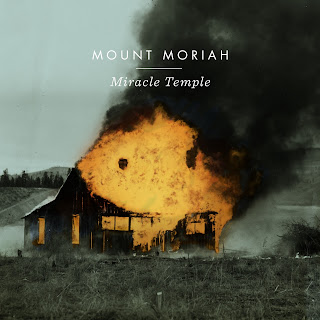 Mount Moriah is Heather McEntire (vocals and guitar), Jenks Miller (guitar) and Casey Toll (bass). Their new album is Miracle Temple - and it is deep, soulful, gorgeous and completely arresting. It demands and rewards your full attention. At the outset, I feel a need to mention that, though they're not credited as band members, the album would certainly not be as full without the contributions of James Wallace on drums, piano and organ, Daniel Hart on violin and Allyn Love on pedal steel. At various points throughout the album, Wallace's drumming, Love's pedal steel or Hart's sweet strings supply absolutely essential transitions.

But of course the core of the band is McEntire, Miller and Toll - there are other players involved, but these three are the songwriters, and the overriding components of Mount Moriah's sound are McEntire's vocals and Miller's guitars. They've hit on what is, to my ears at least, an unbeatable combination: an evocative, memorable voice that sounds as if it was born to sing country songs and some of the best Southern rock guitar licks outside of an Allmans or Crazy Horse record.

This is a joyful, at times achingly beautiful record - it is almost overwhelming in places, it's so good. You'll find yourself bobbing your head in time, swaying along with McEntire's singing and leaning in to follow Miller through a guitar line that goes to familiar, yet unexpected places - for example, I absolutely love the echoes of Dickey Betts' playing on "Blue Sky" that kick in about 3:00 into "Eureka Springs"... though it seems unfair to single out one such moment on an album that is absolutely bursting with them. I mentioned Hart's violin - check out "I Built a Town" - the guitar is a bit understated, and this has the effect of allowing the strings to ramp up the emotion, into another heart-tugging McEntire vocal. On "White Sands", the guitars are just ragged enough to contrast with her light, beautiful singing (and Indigo Girl Amy Ray's gospel-tinged backing vocals).

And here's "Bright Light" - a glorious Southern rock song with some wonderful piano from the aforementioned James Wallace:

The record is out February 26 on Merge. If this is not in my top five at the end of 2013, it will have been a year like no other. And if you have ever liked Southern rock, you are gonna want this thing.