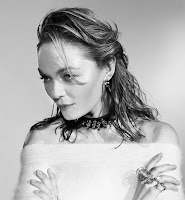 Patti (or Pati) Yang is a UK-based (originally Polish) artist playing electronic rock music. After emigrating from Poland to London at 16, she released her first album at 18. She's part of the well-regarded electronic act Flykkiller and has opened stadium shows for Depeche Mode. She released two EP's in 2012, and is working on an album for 2013. For now (and for a limited time), she's made this track "I Am Ready" available for download:

This will be part of an EP with a couple of remixes (Jagz Kooner and Skylab), then an album later in the year. I really like the way this nearly six-minute track builds and unfolds, and look forward to hearing more from her.