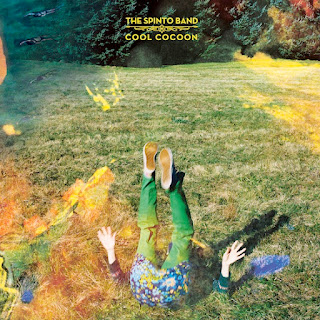 Nine months after the release of Shy Pursuit, The Spinto Band returns with a new full-length record, Cool Cocoon, recorded at their Delaware studio and released on Spintonic Recordings.

For music like this, I tend to favor the poppy, upbeat stuff like "Amy + Jen", with an almost impossibly high vocal and catchy combinations like drums and acoustic guitar on the same beat - it's little touches like that throughout this record are a large part of its charm. Another of my favorites is album opener "Shake It Off" - as upbeat and catchy a bit of power pop as I've heard in years... but it's a sad song, isn't it? "Shake it off, I'm leaving/I've had enough, I'm unhappy with dreamin'..."

The guitars and Monkee/Beatle vocal harmonies abound throughout Cool Cocoon, as do some really good acoustic/electric guitar combinations. And, again, it's little touches, like the way they swing into the chorus in "What I Love" and the way "Memo" builds slowly to a very full pop sound, that make you want to take the trip throughout this record with them. "Memo" is a beautiful song, full of a lot of different sounds and tempo changes that all work seamlessly together. Immediately following it is the downtempo number "Look Away", which is possibly even prettier.

Back into the upbeat stuff, "Enemy" and "Na Na Na" build on a well-played backbeats, and are full of guitar and vocal hooks... until the album closes on "Breath Goes In", a number that builds from a bare vocal/acoustic intro to a full, lush chorus (backed by more irresistible hooks) and back again - and the tight vocal harmonies appropriately close out the album. This is a very good pop record, and the fact that it's their second in nine months is evidence of some very special talent. It's well worth your while to check it out.