REVIEW: When Nalda Became Punk - A Farewell to Youth 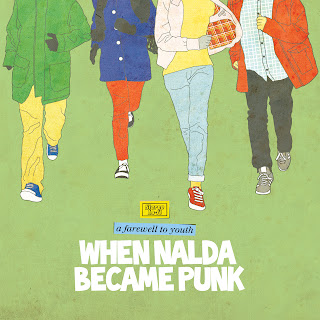 It may be useful to mention at the beginning of this review that the Spanish duo known as When Nalda Became Punk is not in any way, shape, form or sound a punk band.  However, what they manifestly are is an exciting indie pop band that deserves a wide audience.  If there is justice in the pop world, their debut on Shelflife Records, A Farewell to Youth, will push them to the top.  Originally, the band was Elena Sestelo, who recorded a few singles between 2006 and 2011, when Roberto Cibeira was added.  Their first single was "When Nalda Became Punk", and Elena and Roberto had a song and a name.  Elena provides vocals and guitar, and Roberto supplies guitars, keyboards and backing vocals.

A Farewell to Youth was recorded in the band's home town of Vigo, Spain in 2012.  Following the path trod by fellow indie popsters Heavenly, Helen Love, and Spanish bands such as Moving Pictures and Vacaciones, When Nalda Became Punk gifts your ears with a treasure trove of jangly guitars, beautiful lyrics and absolutely top class melodies.  This album has quickly become one of my favorite finds of the year.

You can test the great sound on "When It'll Come", which is available as a free download --

A Farewell to Youth is released on February 5 on Shelflife Records.