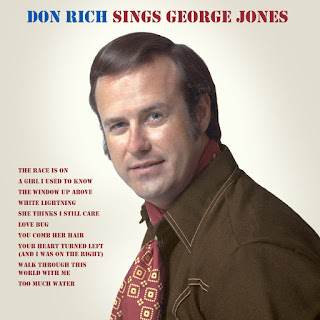 It's been a delight to delve into some of these country reissues from Omnivore Recordings, and this Don Rich record of George Jones covers is no exception. It sounds great, and it is apparently the only solo album Rich ever did.

Unlike the recent Buck Owens reissue disc we covered, which was never recorded as an album, this was meant to be released. It was the result of an approach Owens made to Rich: "Hey, why don't you do an album of George Jones covers?" The Buckaroos had been doing records with various members on vocals, so this was not much of a stretch and the results are terrific. Unfortunately, it was shelved soon after being recorded in 1970 and never released until now... but better, much better, late than never.

I was not familiar with Rich as a vocalist, but hearing the songs on this record, I can't say why. He does a good job of putting his own sound on these well-known Jones songs... especially "The Race Is On" - where a nice California connection already existed for me, having heard the Grateful Dead cover it any number of times. I even hear some similarities - check out the little drum outro:

If you like country music at all, you're going to want to check this out. It may be the best pure country record I've heard so far this year. It's got the Nashville imprimatur of the great George Jones, but it is done in the Bakersfield style made so popular by Don Rich and Buck Owens (who also helps on the record, and has four of his own Jones covers thrown in for good measure). The band is the 1970 edition of the Buckaroos.

You can read a little more about the history of the recordings, and order the record from Omnivore, here.

Nice! I never knew this existed! So cool to see that Don got at least one to call his own, so to speak. Man, he & Buck were SUCH a pair. Thanks for this