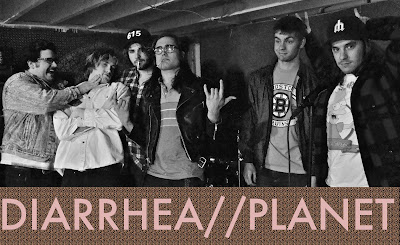 Last year at SXSW, Patrick Stickles of the world's greatest rock and roll band, Titus Andronicus, suggested that we go see a band called Diarrhea Planet from Nashville, TN.  When it comes to SXSW, I don't trust the music advice of many people outside my immediate circle of trusted advisors (namely the guys on this site, my Dad, and The Midgetmen), but Patrick is about as knowledgeable as it gets regarding rock and roll (and most other things remotely related thereto), so I had to check them out.

Despite being worn out from three-days of strenuous and healthy exercise (Hi kids, nice to know you are reading Daddy's blog entries), I, along with the aforementioned Midgetmen, went out into the blinding Saturday at noon Austin sun and rolled into the dark, dank, and stanky concrete block prison that is Beerland to see our first show of the last day of SXSW 2012.  Right before the show started, a guy strolled in and bought two beers, which were served to him with the caps removed, as they always are in every bar I have ever visited.  But he was a rambler and only wanted them capped and to go!  In fact, he wanted to go so badly that he chugged his first beer, gave his extra beer to me, and left.  This was an omen.

Forty-five minutes later, I was completely rejuvenated and was a Diarrhea Planet fan.  Rarely, if ever, have I seen a bunch of guys have more fun pummeling a crowd of 12 people and each other with guitar madness.  Not unlike the the Andrew W.K. set a few days earlier, it was almost too much Rock to comprehend.  So many guitars, so much power, so much fun.

If you like your rock and roll served up loud, with a huge side of fun, check out Diarrhea Planet.  Here are a few more tracks and their super nice video for "Warm Ridin'."


(This is the fourth in my series of SXSW Previews.  Please check out PAWS, Spider Bags and Rah Rah at SXSW as well.)