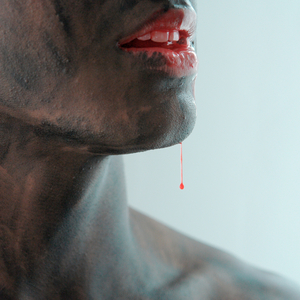 First saw the name of Useless Eaters on a marquee somewhere in Nashville - The End? Kung Fu Coffee? Can't quite remember - just remember thinking what a great punk band name that was - memorable, and upon further inspection, emblematic of an extremely disturbing concept - kind of the same concept behind Fear's great song "Let's Have a War" (if you need a second to go look those up, feel free, but go ahead and start listening to the title track before you do).

The second time they crossed my radar was on the great Memphis punk music discovery blog Tiny Grooves.

And now, the third - they sent a copy of their new record, Hypertension, to our blog for review and I asked Scott to let me cover it. Because I like their sound. From the buzzing, upbeat "Addicted to the Blade" with its bouncing bass line and reverb-laden lead guitar line to the breakneck, all-out punk pace of "Death Gripped" and the punky but sort of sprightly "Wyte Girls", Useless Eaters' lead man Seth Sutton is pulling together some great punk, garage and guitar rock influences into a sound that's his very own. My favorite cut is probably the title track, "Hypertension"... Another favorite is "Smoke Alarm" - a Nuggets-style guitar rocker (Nuggets filtered through another 30 years of garage and punk), and the nearly-5:00 "Vertical Africa" is quite a journey.

Here's "Addicted to the Blade" - released in 2012 as a precursor to the album:

Being a punk-influenced garage rock band from Nashville, they are going to get compared by me to Jeff The Brotherhood, PUJOL and the Turbo Fruits, and if the comparison inspires you to give a listen, it's good as far as it goes, especially for songs like "Black Night Ultraviolet". That one's got plenty of cheesy love patter ("Let me get close to you, baby/ you are truly fascinating/ give me a taste of your honey" - inspired, perhaps, by Pepe Lepew?) married with a truly exhilarating guitar line and a very tasty solo leading into the last chorus.

It's pretty lo-fi and pretty engaging - if you've got a taste for the likes of Ty Segall and JTB, this ought to be a no-brainer. Out tomorrow (Feb. 19) on Jeffery Drag Records.