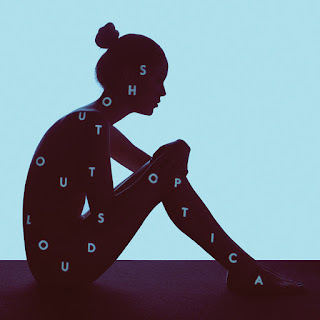 Swedish band The Shout Out Louds are playing electronic rock that is catchy, upbeat and very well-realized. I think their new release Optica will appeal to fans of The Arcade Fire and Franz Ferdinand. Often I see this referred to as "dance rock" and certainly there are dance-influenced aspects to this music, and at the same time, there are elements of nostalgia and reminiscing to the lyrics (much like Arcade Fire). Another touchpoint might be the super-slick, well-realized musical vision and intensely emotional lyrical content of Bryan Ferry.

Optica is their first album since 2010's Work, and upon returning from the tour supporting that album, they spent about a year and a half working on this, their next release. The Shout Out Louds consists of Adam, Bebban, Ted, Carl, and Eric, and they certainly put in the time and work to polish this record to a very bright sheen.

This is catchy music, hummable and memorable. You will find tracks like "Walking In Your Footsteps", with its flutes, becoming earworms.

Here is the album track "Illusions" - it's a very good example of all these influences coming together, and the components that make The Shout Out Louds' music so appealing:

We put up a post last month with two other album tracks here. And right now (through Tuesday), you can stream the whole thing via NPR's First Listen.

Optica is out Tuesday Feb. 26 on Merge Records.