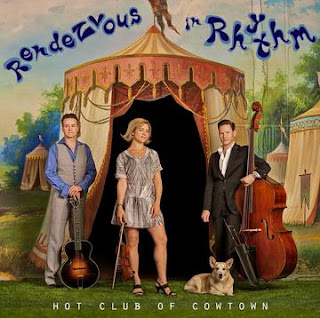 Hot Club of Cowtown is known for its virtuosity, and its sort of Continental approach to Western Swing music. One of the most listenable, talented and unique bands on the Texas scene, they have taken what might seem a logical step with their new album, Rendezvous in Rhythm. This is an album consisting completely of Gypsy songs and American Songbook standards played acoustically and recorded in the hot jazz style of Stephane Grappelli and Django Reinhardt.

Recorded last July at the Zone Recording Studio in Dripping Springs, Texas, it features the band’s take on '30's standards in the style of Reinhardt and Grappelli including “Crazy Rhythm,” “Minor Swing,” “Dark Eyes,” “The Continental,” “I'm in the Mood for Love,” “Douce Ambiance,” and many more.

They live in Texas, and, again, are as good as anyone currently alive at Western swing, but their focus here is much wider than even the big state... “We recently took a band vacation to the Gypsy Festival at St. Maries de la Mer in the South of France,” says the band’s fiddler and vocalist, Elana James. Other band members are Whit Smith, guitar player and vocalist, and bass player Jake Erwin.

“Our band is fiddle, guitar, and bass, and they can do anything together. We’ve always played a combination of hot jazz and Western swing, but it’s been really a joy to finally distill part of our essence and serve up a record that is purely jazzy,” says James. With their familiarity, both with one another and this material, it's natural that they would employ a live recording technique. Smith: “We went back to our way of having everyone in the room together. We recorded it live, right there next to each other so we could hear each other play. I play acoustic on it — not big news, but usually in the past, I would play a mixture of electric and acoustic and sometimes overdub the electric guitar or vice versa. The majority of this album is the three of us there and playing acoustic. We tried to capture the feel of our live shows as much as possible.”

The descriptions of their virtuosity will make sense once you've listened, or had a chance to see them play. But be assured their music is warm and human, too... they've created an album that is absolutely charming - and hot and swinging at the same time - likely, at least in part, the result of the live recording technique. I find that I prefer the slower, more melancholy stuff like "I'm Confessin'", but on several of the tracks they start out slow and pick it up - check out "Melancholy Baby" and this one - "Dark Eyes" - one of the album tracks:

This album is a delight. If you like hot jazz, you need no further description than to glance at the song titles or multiple references to Grappelli and Reinhardt. If you like well-played acoustic music, you don't need to know a thing about hot jazz or gypsy music to enjoy this record - just as a familiarity with Bob Wills was not necessary to enjoy their previous releases. You can learn more, view tour dates (they've got some very wide travel planned), buy or listen at their website.

And so is this: