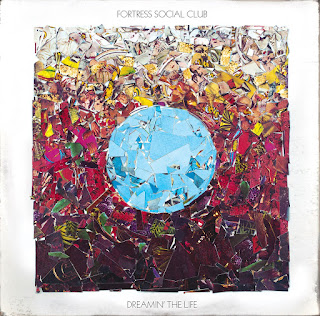 Fortress Social Club is an LA-based collective of creative, productive pop musicians led by vocalist Shawn Harris and guitarist Mykul Lee who record at The Fortress, a well-respected studio in Los Angeles, and who wear their influences and their intentions proudly on the outside. Whether it's British Invasion rock, the guitar jangle and choruses of 70's American power pop, some surf, doo-wop, or a bit of punk backbeat, they hold nothing back in their quest to make catchy music designed to make you have fun. Try this: play "I Had to Laugh" at your next gathering.

At the risk of using "Beatlesque", well, hell, that one's just absolutely Beatlesque, in the most delightful way. It's Beatlesque in the way some of the best music of The Hollies and Big Star was. Fortress Social Club has a way with a nice variety of pop hooks, guitars and choruses - you'll find yourself nodding, bobbing and singing along as the stuff grows on you. As a rock vocalist, Harris is a star - sort of a cross between Marc Bolan and John Lennon. And Lee's guitar is in the grand California surf-rock tradition of artists like Dick Dale. But there's so much more than just guitar and vocals going on, and that's what makes this album so much fun to come back to. Horns, harmonicas and even a British lady doing a countdown, they've thrown in everything but the kitchen sink.

It's pop/punk - definitely further along toward the pure pop side, but with enough backbeat and swagger to make me recommend it to those of you who like your guitar pop flavored with punk, surf, glam and similar leavenings. And a lot of the songs on this record just swing with abandon. Fortress Social Club are talented, and clearly having a great time. And that's when some of the best albums are made.