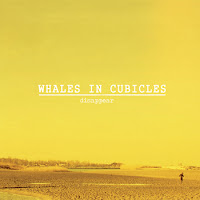 Whales In Cubicles is the project of singer/songwriter Stef Bernardi, a Brit who met the other two band members, Alex and Jamie, when he was in the US, at a Dismemberment Plan show in DC. He's returned to the UK and they formed this band, and have generated some buzz over there. This song is to be followed by an album in the fall. This single, "Disappear", is all we have for now, but we like what we hear - good guitars, nice harmony vocals and good pacing in the rhythm section:

This is a big guitar rock sound - recommended if you like Foo Fighters... and stuff like that. Does anybody remember Creeper Lagoon? I always liked those guys. Anyway...

If you wanna keep track of them, here's their website: