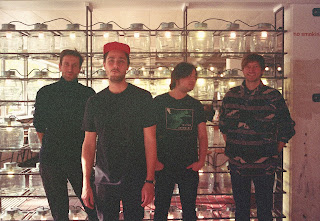 The Cheatahs, whose terrific album we reviewed here earlier this year, recorded a couple of acoustic duet performances at a recent stop in France. Given that their appeal to me is largely based on layers of sound, built-up vocal harmonies and guitars, I will admit I wasn't sure how well acoustic versions would go over. But they are terrific - with two acoustic guitars and two voices, the vocals and the songs' melodies really shine. Here's "Fall":

And just in case the earlier review and tracks we posted didn't close the deal, they've shared another single online. Here's "Leave to Remain". Layer upon layer of guitars and vocals - just wonderful rock music:

They're out on tour, Europe now and U.S. in June: