REVIEW: Papercuts - Life Among the Savages 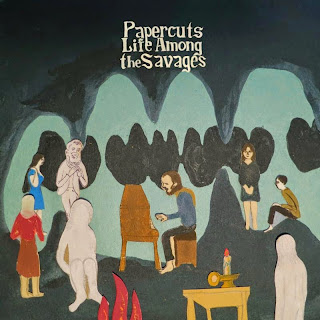 Papercuts is San Francisco singer/songwriter Jason Quever - we've written about him before but it's been a while. The new album is Life Among the Savages and it's a gorgeous affair - I hear echoes of psychedelic rock and pop classics throughout, but like the best of this genre, it doesn't sound exactly like anything else.

The opening track, "Still Knocking at the Door", puts me in mind of Traffic and the Beatles at the outset - it's the use of piano, I think. To be honest, I'm not sure exactly what it is, just an overall feel. Most of the tracks here are pretty laid-back, but very full and extremely melodic. Another artist I'm reminded of is Elliott Smith, and in that comparison I am also reminded of how very difficult it is to describe music like this... once I got a listen to Smith, I recall thinking I had never seen a review that did justice to his music - the way it combined beautiful melodies with quiet intensity. So it is with Quever. Raves from people you trust are the best way into an artist like Smith, or Papercuts. Do you trust us at WYMA?

Here's the video for the title song, a lush, string-filled track with a wistful, at times almost ethereal vocal that kind of fits the lyrics ("out here among the savages life is a gas/but I can hear you calling me... to come back, back to the shore"):

Here's track two, "Still Knocking at the Door" - another beautiful melody. The opening part of the song is built on keyboards and Quever's vocal, then it opens up and really fills with strings, guitars and what sounds like a double-tracked vocal in the chorus:

There's not a weak song on the album - there are only 9 in all, and they flow together well. Though there are common traits to most of the songs (Quever's hushed vocals, piano/strings on top of understated rock instrumentation), there is some variety in song structure and tempo - "Easter Morning" is a beautiful ballad along the lines of Smith's "Waltz #2", while "Family Portrait" is more upbeat and guitar-based. I like Quever's touch in producing all these tracks - he seems to have a good feel when to lay on the more baroque or psychedelic effects, and when to let the more basic components of the songs, be they pianos, guitars or vocals, speak for themselves.

Life Among The Savages is out now on Easy Sound Recordings (released May 6 in US, May 12 in UK).