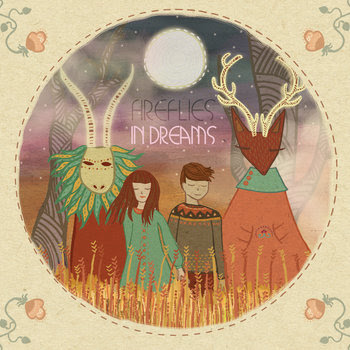 In Dreams, the latest album from Fireflies, is the kind of music that can give twee, indie pop a good reputation if listeners give it a chance.  Hushed, heartfelt vocals, jangling and ringing guitars, lush synths, and breezy melodies.  You've heard music like this before, from The Clientele, Belle & Sebastian, the Field Mice and Galaxie 500, among others.  But if you are an indie pop fan, you've never heard enough.

Fireflies is the project of Lisle Mitnik, born on the east coast, educated on the west coast, and settled in Chicago.  His work has been released on several different labels, but In Dreams is released on Seattle's Jigsaw Records.  His work reveals his interest in re-interpreting classic '60s pop with a lo-fi aesthetic and classical song arrangements.  And it is that approach that renders his music most interesting to me.  He doesn't faithfully replicate the past, but rather re-imagines it.  As a result the music has an immediacy and vibrancy that imitators rarely manage.