REVIEW: Chain and the Gang - Minimum Rock and Roll 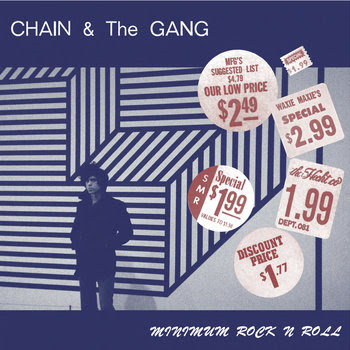 Ian Svenonius' concept for Minimum Rock and Roll, the fourth album from Chain and the Gang, is no-frills, economic rock and roll.  And it seems to me that it is both an interesting concept and very well executed.  The songs are punchy, stripped down rock and roll, a bit punky, decidedly R&B, and, at times, a bit rootsy.  The concept infuses the construction of the music, but it is never distracting.  And perhaps that leads us to the key point that the delights in rock and roll are found in the simple building blocks of a pulsing bass, backing drums, guitar riffs, male/female vocals, and a touch of outlaw attitude.  Of course, it works in part because Svenonius has written some very witty, entertaining songs and his lead vocals are spot-on.  Are we being preached to?  Well, maybe a bit.  But I'll happily take it when it comes with a wink and the tunes are this good.  This lot has something to preach about, so turn the volume up.

In addition to Ian, the players on Minimum Rock and Roll include Chris Sutton on bass, Brett Lyman on guitar, Fiona Campbell on drums and Katie Alice Greer providing vocals.  The album is out now via Fortuna POP! in Europe and via Radical Elite Records in the US and remainder of the world.