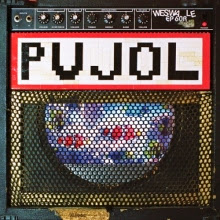 PUJOL is a band, and it's Daniel Pujol, a Nashville-based singer/songwriter. On their latest album, KLUDGE, the band is playing a post-90's take on a very 70's sound. It's sort of an amalgam of Bowie, Bolan, Kiss, ELO and Queen (he even says Freddie's name a bunch in "No Words") filtered through our knowledge that, since then, there have been whole waves of punk, post-punk and post-post-punk. So, retro-glam-scuzz? Listen and develop your own moniker for it. Or don't develop one - but definitely listen. Opening track "Judas Booth" is a good example of PUJOL's sound - raw, honest singing over heavily tracked guitar tones that in places remind me of Thin Lizzy's sort of dark-night heroic sound.

Bands these days operate on so many levels it's hard to keep up, hard to tell when they mean what they say or just the opposite. That's not a problem with this band - I find it best to assume it's all sincerity, as in "Post Grad" when Daniel intones: "Tonight we're going to use our rock n roll powers for GOOD, instead of complacent, negligent, self-hating evil!"

As he's done previously on United States of Being (WYMA review here), Pujol carries on an extended monologue addressing all the crazy stuff we're learning to take for granted: alienation bordering on universal solipsism, drones, the absurdity of carrying the world's accumulated knowledge on a device in your pocket, 3-D printing - and wonders if we even have a choice anymore to use them for good or evil? After all, as stated in "Manufactured Crisis Control", the bracing second track, the new him and the old him are in a fist fight - a state that can certainly be writ large to speak about humanity and the issues we're struggling with (when we can be forced to contemplate them).

Here is a video of the band playing "Manufactured Crisis Control" in Nashville:

Here's a link to an interview with Daniel, also featuring a download of the album's single, "Pitch Black" - a real singalong track. As a description of his take on the artistic process and how it informs his music, the interview is really a terrific read.

To his credit, all this social commentary and honest philosophizing is done without ever forgetting to rock out. More to his credit, if all you want to do is rock out, that's easy to do with this album... so he's got you either way. KLUDGE was made by Daniel Pujol with help from producer/drummer Doni Shroader, assistant engineer Travis Atkinson, bassist Clayton Parker and lead guitarist Brett Rosenberg. The record is out now (released May 20) on Saddle Creek.