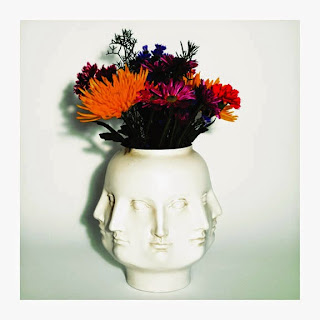 "Reverie" is defined as "a state of being pleasantly lost in one's thoughts; a daydream". Of course, there's also a musical definition: "an instrumental piece suggesting a dreamy or musing state". The Buffalo Killers have released their fifth album Heavy Reverie on Sun Pedal Records, and it both feeds on and inspires states of reverie. As always, they feature plenty of instrumental interludes, but none of the songs are strictly instrumentals. This is not a meandering jam band - Buffalo Killers are driving hard, straight ahead, and the guitars are raging. So I'd opt for the definition featuring "pleasantly lost."

Here's a recent video of them from SXSW this year, playing "Who You Are?" - the guitar tones are terrific:

And here's "Dig On In" - a real head-banging cut. I've noted before that one of my favorite features of the Buffalo Killers is the Gabbard brothers' vocal approach, a warm, full freight train of a thing that calls to mind Joe Walsh at the height of his powers, but to single that out is to shortchange the ferocious drumming of Joseph Sebaali. I wouldn't want to do that:

Nor would I want to fail to mention the spectacular guitar playing throughout this record. In addition to the Gabbards and Sebaali, the band now features guitarist Sven Kahns on electric and pedal steel guitars. There aren't many bands that combine heavy and melodic like the Buffalo Killers - you really have to spend a little time listening to appreciate it. They point back to James Gang, Crazy Horse and, in spots, classic Stephen Stills. I don't mean to brand them as solely a throwback or nostalgia act - this is all original music and they synthesize their influences through tremendous talent - to me, that's their strongest suit. They're so good, they almost make it sound easy.

Heavy Reverie is out tomorrow (May 13) on Sun Pedal Recordings. They'll be out on tour later in May and throughout the summer - read more and buy the record at their sites below.